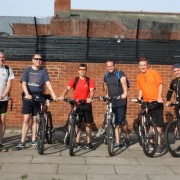 On Saturday 27th July six intrepid adventurers attempted to ride the length of the Liverpool – Leeds Canal over two days. The weather was warm and sunny as we set off in good spirits at 08:30 and initially made good time. We reached Parbold early afternoon where we were met by Team Shewsy (aka Jade Cotton) with an abundance of pasta, potatoes, cold drinks and fresh fruit. The terrain was reasonable until this point but it gradually became steeper and bumpier as we headed towards The Pennines. The pace became slower as the day wore on and two punctures for Breo and one for Duffy didn’t help matters. The last 20 miles were really tough and asking ‘how far is Burnley mate’ to passers-by became a joke amongst the team as we were always greeted with the answer ‘half an hour’. It was half an hour every half an hour! We reached Burnley at 7:30 pm, exhausted and sore with some mild heat exhaustion and all were in bed by 9:30 to rest for the following day’s 57 miles.

A good night’s sleep worked wonders for the team and we attacked the second day with vigour. The terrain was flatter although still quite bumpy and some parts were even downhill. At times, it was difficult to appreciate the surrounding countryside as parts of the route required extreme focus and concentration. But with our spirits up and the finish getting nearer we were able to take advantage of the scenery around us and the journey from Skipton to Leeds revealed some breathtaking views.