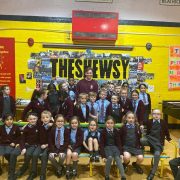 It has been a pleasure to have intern Chad usher with us for the past couple of months. Chad left Shrewsbury school in the summer and goes on to Sandhurst next September. His placement has been funded by the Old Salopian club and it has been great to see him grow in confidence during his short stay here.

Both the staff and young people have loved having him here and he has proved to be a very strong addition to the staff team. Chad will be greatly missed when he finishes at the end of the month and the door will always be open for him at the Shewsy.  Jac, also from the school will start his internship with us in January and has some pretty big boots to fill.

Also thankyou to Zainab from Shewsy school who spent a couple of weeks volunteering during the half term. She left this message…..“Just wanted to say thank you so much for having me in half-term. It was an absolute delight and I learned so much from everyone. I felt welcomed and taken care of as usual so thank you again for that. I also got to know the club members a lot better which made leaving the Shewsy even harder, but I hope I can visit again sooner rather than later”

The Big Give Christmas Challenge – can YOU help?
Scroll to top