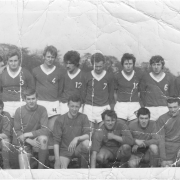 We have started on a new project in our Archives group titled ‘Shrewsbury House – The Football Story’.  We are trying to gather as much material as possible that tells the story of the club’s football since 1903.  We haven’t managed to get quite that far back but we do have a photo of a club football team in 1907!

We’re not quite sure whether this turns into a book or what at this stage, but we have an impressive collection of records, words and pictures already. Below are a couple of extracts.

Both Chris and Billy Lloyd, who later famously signed for Tranmere Rovers, could write a book about the Shewsy, remembering stories like old Billy Dalrymple, the storekeeper who predated Alf in the mid 1960’s, and his dishing out the footy gym kit and of course the ex-army issue brown pumps. “You were lucky to get two pumps the same size with laces and no holes before kicking off in top gym” says Billy Lloyd.