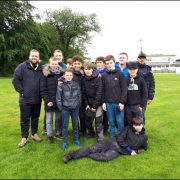 The club has teamed up with Everton and Liverpool football clubs and the Princes Trust to apply to Government for a share of their Serious Violent Crime strategy’s Early Intervention Youth Fund. In March 2019, we heard that the Home Office had agreed to fund our joint bid.

Merseyside’s Police Commissioner Jane Kennedy said: “Reaching young people before they are targeted by more sophisticated individuals who draw them into a dangerous, criminal lifestyle is essential if we are to break the cycle of gang-related violence in our communities. I was really pleased to be able to work with these four really effective organisations and I’m delighted that the Home Office has recognised the importance of this project by allocating £700,000. With this money, we can work in the most troubled communities to target the young people most at risk of harm, building their confidence, equipping them with new skills and encouraging them to strive for a brighter future.”

The initial Early Intervention Youth Fund course, entitled “That’s Life” with 12 participants finished in June and was a huge success. Young people were selected according to a range of risk factors such as:

The programme sought to reduce these and bolster the protective factors that can keep them on safer paths. The feedback we have received from the police and Notre dame school has been really positive.

The Home office has approached us to discuss further funding as part of their reducing Serious Violence strategy and we have a verbal agreement of an additional £24,975 to pay for our senior club sessions and some additional staff from now until March 2020. A further meeting is set for October with the aim of putting together a plan to securing a further 5 years’ worth of Home Office funding.

The second course is underway.