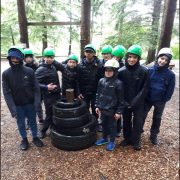 ‘Everton has one of the highest levels of deprivation in the UK and in many instances there are generations of families who have never been legitimately employed’ writes Team leader John Dumbell.

‘The Early Intervention Youth Fund (EIYF) programme is largely based around confidence and decision making using moral dilemmas as tools to provoke thought and mimic real life situations and the pressures and emotions felt by the decisions made. The feedback from the initial cohort of young people was really positive and all of the group have remained engaged in activities provided at the club since their completion of the programme.

‘There has been an increase in confidence from the group as a whole and some real individual progress too. This has been measured throughout the course as has the young peoples attendances at School. One of the main risk factors for this group is their attendance, and with this in mind we held the programme on a Friday with the understanding that in order to attend Fridays they had to attend for the remainder of the week. This seemed to have a positive impact on their attendance as 11 out the 12 attended every session.

‘As a result of the funding received by the EIYF, this has enabled us to take on 2 additional full time members of staff to work on the programme. Once again, we are working in close partnership with the local police and this time we have identified a group of 12 young Shewsy members who attend Everton free school and have all had previous dealings with the police, many of whom have already signed ABC’s (acceptable behaviour contracts). The additional funding has also allowed us to open up on a Friday evening. This has seen an additional 185 individuals engaged regularly on a Friday evening many of whom have now become regular users of the centre during regular youth club sessions.

‘The feedback we have had for the Friday evenings has all been positive both from local businesses to the local police informing us that there has been a significant drop in anti-social behaviour calls around the area.

‘The additional activities offered has seen our membership rise to the highest we have had in my 15 years here averaging between 50-70 young people per session aged between 11-19.’